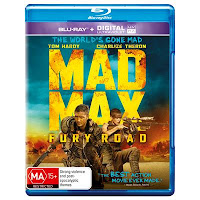 I have seen, I think, one of the Mel Gibson Mad Max movies. The one with Tina Turner in it. I remember it being vaguely batshit, but not much else.


In this incarnation, it’s gone full batshit. And I mean that in a good way.


Tom Hardy takes up the Mad Max mantle this time around, surviving in a post-apocalyptic world where the worst of men control all of the world’s remaining resources - mostly gas, and water.


One of those men is about to send out his favourite Imperator - Furiosa - in search of gas - when Max stumbles over her, and her very illegal cargo - young women that the bad man back at the compound treated as little better than breeding cattle.


Oh, this was great. I loved it. I really, really loved it. It was crazy insane, and the crazy never let up, but it was so great.


Tom Hardy says about three words in the whole movie, and the rest of the time  he looks a bit like a confused golden retriever, but that’s okay because Furiosa knows exactly what she’s doing the whole time.


It’s set in post-apocalypse outback Australia, as were the originals but I’m pretty sure any and all similarities end there.


I just. Look, my favourite terrible, bad, great movie most recently is Jupiter Ascending. Mad Max Fury Road does have the distinction of making slightly more sense than that clusterfuck (that AWESOME clusterfuck) but Mad Max also has a guy strapped to the front of a giant truck playing an electric guitar.

Ride eternal, shiny and chrome.
Posted by Maree at 18:27