When Toby falls foul of a bad man during the course of an investigation, she loses 14 years of her life - including her family. Determined not to fall in with the Fae again, she sets about carefully constructing a normal life.

Unfortunately, the Fae are not done with Toby, and when an answering machine message binds her to find out the murderer of the Countess Winterrose, Toby finds herself reluctantly drawn back into the world she had deliberately left behind her.

I have to admit, I don't read a lot of urban fantasy. I'm super-picky about certain genres and this is one of them, simply because of the sheer volume of paranormal romance in the genre. (Romance, in itself, isn't really my thing. Very specific criteria have to be met for me to enjoy a romance novel). But. I started Rosemary and Rue, and found myself drawn into Toby's story.

There's a lot of world-building but it flows seamlessly along with the story itself and didn't detract from the mystery as Toby races against time to find out whodunit. 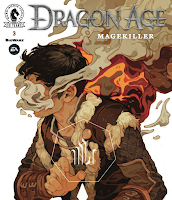 The plot thickens in issue #3 of Magekiller, as Tessa and Marius find themselves garnering the attention of a nascent organisation battling to save Thedas: The Inquisition.

We find out  a little bit more about Tessa's past, and the story moves along as Tessa and Marius stumble across demons spitting out of Fade rifts all over Ferelden. It's an interesting addition to the series, but I'm ready to see the story move along. Love love love Tessa, though. :D

Ah science. So much science. So. Much. Science. During a mission to Mars, astronaut Mark Watney is left behind after an accident on the surface means that his crew assumes he's dead.

He's not, and so begins Mark's struggle to stay alive on Mars long enough for rescue.

There is. So. Much. Science. Did I say that? Especially in the early going, and I found it a bit of a struggle to be honest, but once NASA gets involved, and theres more than just Mark talking to himself about potatoes, things start moving pretty quickly.

It helps that Mark is something of a smartass, which leavens the seriousness of the overall storyline and makes the science-y bits easier to get through. Entertaining, though.