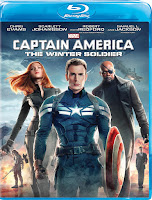 You know those movies, that when you watch them, you go "I wish everyone who made action/superhero movies would watch this movie and take notes!"

Well, I wish they'd watch The Winter Soldier, because that is how this is DONE.

It has everything you could ever want. Steve Rogers in inappropriately tight T-shirts, flirting with Sam Wilson, Natasha Romanov, aka, the Black Widow, being awesome IN HER OWN RIGHT and not just as an adjunct to the main dude. And the STORY. The story is great, and clever and doesn't treat the audience like moronic drones.

It's not colour-by-numbers if you see what I mean.

Anyway. The Winter Soldier is set after The Avengers, and Steve is trying to find a place for himself in the world still. He's getting better at it, and when he meets Sam - a fellow military veteran who gets at least some of what Steve's going through, he starts to open up a little bit.

THEN everything goes to hell in a Hydra-decorated handbasket, and the Winter Soldier (aka Bucky Barnes, aka Steve's lifelong bestie) wears too much eyeliner and EVERYTHING IS TERRIBLE BUT ALSO GREAT BUT ALSO TERRIBLE.

I wasn't sure what to expect from this after Captain America: The First Avenger, because that's not my favourite film in the whole Marvel/Avengers collection but The Winter Solider is absolutely A+

Then I start thinking how Natasha was treated in Age of Ultron and I get angry again but LET'S NOT GO THERE.

Email ThisBlogThis!Share to TwitterShare to FacebookShare to Pinterest
Labels: review, the winter soldier