The year that was

This past year, however, we did lose three cats - two to the ravages
of time, and my sweet girl, Morgana, to a car. She was my lap buddy and only two and a half. That hole in my heart is still open. That photo on the right is very typical of her. Every time I sat down, there she was. I miss that quiet weight so very much.

Let's see ... I also rolled the dice on my job and took redundancy. Which, so far, hasn't been a bad thing. I've taken the chance to kick back at home, which I've never really been able to do. But it's getting to the point, now, where I do need to find something fairly soon.

Cross fingers for me? :) 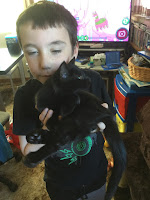 What else. Spawn turned eight in May, and he's a happy, healthy gamer kid. So that's something to be thankful for. Here he is with one of the kittens we adopted last month - Felicia, I think. Inevitably, he's fascinated by them, but he's pretty good with them and of course kittens have little claws and teeth as warnings if things get to be too much. 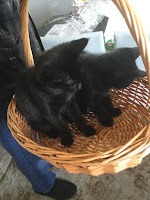 Speaking of kittens ... they're both black, so getting good pix is nearly impossible, but I do try. That's Felicia and Ivy in the basket. I think Felicia is on the left - her coat is a bit lighter and glossier. They're very typical kittens and so a joy and a burden to have around - lol. 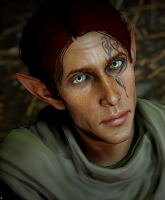 What else have I done this year? I ...... have played a lot of Dragon Age. Especially since I finished work in September. I'm on my third Origins playthrough since last year, and my third Inquisition playthrough since .. well. Since September. I'm trying to limit it at the moment a little bit because I play on PC and I've found that I'm getting pain in my right index finger knuckle, if that makes sense.

I've "traced" it back to the gaming, and much mouse-clicking, so I'm taking a few days off. But look at my Inquisitors; Ellana and Gethriel (I call him Dorkvellan because well, I accidentally made him look like a dork). Anyway, don't get me started on Dragon Age, I'll never stop.

I didn't expect to love a game so much, but good golly gosh, I love it so very, very, very much of a lot.


Anyway. I also made my goodreads goal this year: https://www.goodreads.com/user/year_in_books/2015 and I'm thinking of pushing the boat out and aiming for 80 books in 2016. We'll see.

I also took up baking again, something I haven't done in 20 years or more, with various rates of success. I enjoy the process though, and with it being school holidays, I can drag spawn in to help me with some of it, which he seems to enjoy.

Oh! I also moved! Sort of - lol. From http://justaddbooks.blogspot.co.nz/ to here. It felt like the right time. :)