Review: Poi E - The Story of Our Song 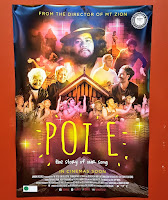 Being 13, I was of course deeply invested in the weekly countdown on RTR, the chart show on TV2 that counted down the nation's top 20.

Then. THEN. Something Happened.

And that something was this:

The song, obviously, is Poi E, performed by the Patea Maori Club. It came out of nowhere, smashed Foster and Allen to hell and back, and order was restored on the charts.

Poi E - The Story of Our Song, is a documentary that charts Poi E's success, its enduring appeal, and its very solid and sure place in New Zealand's popular culture.

ANYWAY. The doco also charts part of the life of Dalvanius Prime, a Maori singer/songwriter who co-wrote Poi E with Ngoi Pewhairangi.

The doco frames itself around Dalvanius and, with archival interview footage (Dalvanius passed away in 2002), and reminiscences from members of the Patea Maori Club, the Patea community, the Ngaruawahia Kid (the one in the video who does the breakdancing), and interviews with members of Dalvanius's family and Kiwis like Waititi, Walker and Sr Dr Pita Sharples, it places Poi E very solidly at the centre of New Zealand culture and history.

Poi E is possibly the most New Zealand/Aotearoa story that ever was.

Patea was facing potential ruin with the closure of the local freezing works, the main employer of the town, and Dalvanius and Poi E came along, as far as I can tell (please correct me if I'm wrong) to give the whole town - and indeed the country - a bit of a lift.

Poi E - The Story of Our Song is well worth seeing. Just. Be ready for the earworm ....

Email ThisBlogThis!Share to TwitterShare to FacebookShare to Pinterest
Labels: movie review, poi e - the story of our song