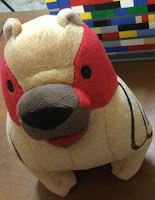 So, a while back, Trish at http://www.lovelaughterinsanity.com/ did this post about creating her happy list - things in her life that, well, make her happy.


The idea came from this post on another website: http://modernmrsdarcy.com/things-saving-my-life-right-now/ and so I thought “hey, that’s a good idea for a post!” And then immediately couldn’t think of anything that was currently saving my life/sanity/my skin cells ….


However, I am Making an Effort to blog more outside of the weekly meme so. Here goes?

1) Big Finish: https://www.bigfinish.com/ essentially radio plays and audiobooks. I came across them originally because of Alex Vlahos, who played Mordred in the last season of Merlin. (He’s in Versailles now, playing the king’s brother). He performs as Dorian Gray in The Confessions of Dorian Gray - a what-if scenario that posits Oscar Wilde had based his famous character on a real person. There’s four seasons so far, and the fifth - and final - is due out in October. I’m working from home at the moment, and silence is a bit too much, but if I’m watching something, I get distracted. Big Finish audiobooks/plays are ideal workmates. Oooh, also, there’s a three-episode series with David Tennant and Catherine Tate as Dr Who/Donna. (See also: audible.com)


2) On a similar theme … Welcome to Night Vale, and Alice Isn’t Dead. Both podcasts. Night Vale has been described as Twin Peaks meets Stephen King, which is not a bad description. Website here: http://www.welcometonightvale.com/ The podcast is free. Alice Isn’t Dead is more recent, and is created by one of Night Vale’s writers - Joseph Fink. It’s performed by Jasika Nicole, who also voices Dana on Night Vale. The narrator (Nicole)  is driving a big rig (I think that’s right) across  America, searching for Alice, her missing wife. It’s seven episodes in so far, and it’s ...creepy. Really good though.


3) The #30for30crafting hashtag on Instagram. Created by crafting geek, here’s the original post explaining the idea: https://thecraftinggeek.com/2014/07/23/hey-listen/ I have ……………. Many cross-stitch projects, but that’s not what this post is about *ahem*. Generally speaking, I do a couple of hours stitching a week at my friend’s house on a Saturday night. So I decided to take up the #30for30crafting challenge, and I’m glad I did. It doesn’t seem like much, but it’s just so. Nice. I do it after spawn’s gone to bed - throw in an episode of something - usually The Walking Dead at the moment (I’m behind on every single TV programme I follow ever) and stitch. I don’t do more than 30 minutes because I have to factor in packing it up and putting it away, and also work the next day. My friend describes it as a meditation, and I have to say, she’s right.


4) My iPad. I don’t care. I love it. I love my iPad. It has all of my lovely things on it, like my favourite games, and social media, and ebooks. I browse through iBooks sometimes, looking for something new to read, or I can play my favourite games (right now, it’s Whiteout, by the makers of Lifeline, and Farmville: Harvestswap. And Two Dots) while I’m watching TV. It’s a familiar weight in my hands, and I love the fact that I can be connected with people all over the world at just the touch of a screen.


5) Dragon Age. I’ve talked about these games before (a lot) and I’m not sure I can convey the feeling they give me - escape, excitement, dread, even, when I launch one of them, and watch as the title screen loads and the music starts playing. As much as I love many, many escapist things - reality TV (up to a point. As I said to someone when they asked if I’d watch Married at First Sight “I have standards. They’re low [see: The Bachelor NZ], but I have them); books, movies …  but there’s something truly escapist about disappearing into Thedas and saving the world - either as a Warden, a Hawke or the Inquisitor.


6) archiveofourown.org - sometimes you just want to read fic about your OTP. Or well-plotted long fic. Or smut. Or - you get the idea. It’s my go-to place every morning after I’ve scrolled twitter and facebook, and there’s almost always something to lose myself in.


7) Pinterest. I started collecting quotes to put in my diary every day, and for a start I was laboriously googling them and it was taking bloody ages. Then I realised I could create a board on Pinterest for such a thing, and it changed my life. (Not my whole life. Sunday nights, which is when I do the diary thing. Took WAY less time.) Also on Pinterest I discovered the best chicken marinade ever which is literally just barbecue sauce and honey. About half a cup of the first, couple tablespoons of the second (to taste, is what I’m saying), bung it over some chicken, marinate for at least 30 minutes, and honestly nommmm nom nom. If I’m feeling energetic, and I’ve cut my chicken vaguely lengthwise, I’ll then crumb them in - PANKO. PANKO CRUMBS CHANGED MY LIFE BUT I DON’T WANT TO DO MORE THAN SEVEN THINGS. - crumb them in panko and bake them in the oven. So. Good.


I’m sure there’s others I haven’t thought of. But there you have it. My seven sanity-savers. (Try saying that five times fast …)
Posted by Maree at 21:31